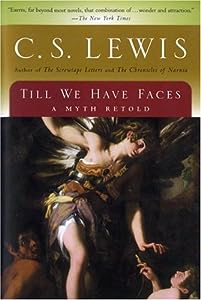 Cover of Till We Have Faces

I just finished reading C.S. Lewis‘ story Till We Have Faces. I found it very enjoyable.

I had thought it would be an allegory like The Pilgrim’s Regress, with lots of literary and classical allusions and references. I thought I would need to at least know the original story of Cupid and Psyche. However, I found that was not necessary. The best part was when Orual meets her sister Psyche once more, beyond all hope, in a secret valley; she can see Psyche, but she cannot see the palace she lives in. Why not? She does not want to. She sees that Psyche is happy, happier than she has ever been, but Orual does not allow herself to accept Psyche’s happiness. All she wants to know is, “Does Psyche still love me?” In other words, she is self-centred.

The most significant thing about Psyche, as far as the world is concerned, is her physical beauty. However, it is also mentioned that she was a happy person, without malice. When Orual meets Psyche in the secret valley, Psyche’s happiness and the power of that happiness, rather than her physical beauty, become clear to the reader. It also becomes clear that Orual is an unreliable narrator.

I found these lines particularly poignant:

I was too busy… What did I not do? … I did and I did and I did – and what does it matter what I did? I cared for all these things only as a man cares for a hunt or a game, which fills the mind and seems of some moment while it lasts, but then the beast’s killed or the king’s mated, and now who cares? It was so with me almost every evening of my life; one little stairway led me from feast or council, all the bustle and skill and glory of queenship, to my own chamber to be alone with myself – that is, with a nothingness. Going to bed and waking in the morning… were bad times – so many hundreds of evenings and mornings. Sometimes I wondered who or what sends us this senseless repetition of days and nights and seasons and years; is it not like hearing a stupid boy whistle the same tune over and over, till you wonder how he can bear it himself? (the end of chapter 20.)

The Greek tutor perhaps represents rational thinking, human intelligence. He despises the pagan religion, the superstitious worship of the goddess Ungit, and the uncritical belief in Ungit by the common people of that land, and as he is made tutor of the King’s daughters, he teaches them his philosophy. He manages to make Orual hate the native, pagan religion, but is not able to persuade her that the religion is powerless or meaningless.

In one memorable scene, we see the Fox (the Greek tutor) pitted against the Head Priest of the Temple of Ungit, in the presence of the King and Orual. The Priest has come to tell the King that the drought, the famine, lions, and now some mysterious horror called “the Brute”, are because Ungit is angry, and must be propitiated

“Those who have seen [the Brute] closest can least say what it is like, King… Your own chief shepherd on the Grey Mountain saw it the night the first lion came. He fell upon the lion with a burning torch. And in the light of the torch he saw the Brute – behind the lion – very black and big, a terrible shape….”

“By the King’s permission,” said the Fox, “the shepherd’s tale is very questionable. If the man had a torch, of necessity the lion would have a big black shadow behind it. The man was scared and new waked from sleep. He took a shadow for a monster.”

“That is the wisdom of the Greeks,” said the Priest…. “We are hearing much Greek wisdom this morning, King… and I have heard most of it before. … It is very subtle. But it brings no rain and grows no corn; sacrifice does both. It does not even give them the boldness to die. That Greek there is your slave because in some battle he threw down his arms and let them bind his hands and lead him away and sell him, rather than take a spear-thrust in his heart. Much less does it give them understanding of holy things. They demand to see such things clearly, as if the gods were no more than letters written in a book… nothing that is said clearly can be said truly about [the gods]. Holy places are dark places. It is life and strength, not knowledge and words, that we get in them. Holy wisdom is not clear and thin like water, but thick and dark like blood.”

Later in the same scene, the angry King “had the point of the dagger through the Priest’s robes and into his skin. I have never… seen anything more wonderful than the Priest’s stillness… The Fox had taught me to think… of the Priest as of a mere schemer and a politic man who put into the mouth of Ungit whatever might most increase his own power and lands or most harm his enemies. I saw it was not so… The room was full of spirits, and the horror of holiness.”

Later, Psyche, who is to be sacrificed to Ungit, tells her sister Orual,“The Priest has been with me. I never knew him before. He is not what the Fox thinks. Do you know, Sister, I have come to feel more and more that the Fox hasn’t the whole truth. Oh, he has much of it. It’d be dark as a dungeon within me but for hist teaching. And yet… He calls the whole world a city. But what’s a city built on? There’s earth beneath. And outside the wall? Doesn’t all the food come from there as well as all the dangers? … things growing and rotting, strengthening and poisoning, things shining wet… in one way (I don’t know which way) more like, yes, even more like the House of [Ungit].”

Orual slowly becomes convinced that the Fox indeed does not know everything, wise though he is, and that the Priest knows of a deeper, stronger power. She believes that power is evil, “He thought there were no gods, or else (the fool!) that they were better than men. It never entered his mind – he was too good – to believe that the gods are real, and viler than the vilest men”; but Psyche is not so sure: “Or else thy are real gods but don’t really do these things. Or even – mightn’t it be – they do these things and the things are not what they seem to be. How if I am indeed to wed a god?” “Wed the god” is how Psyche’s sacrifice is called, although everyone believes this means in fact she will die, perhaps by being eaten by “the Brute”. In fact, Psyche is correct: the reality is more wonderful than anyone imagines, of a wonder that most people, including Orual, cannot conceive of or accept.

This story contains several themes that recur in many of C.S. Lewis’ stories:

One of the key points of the Psyche and Cupid story is that Cupid fell in love with Psyche and built a palace for her, but he forbade her to see his face. This fits in with Lewis’ understanding of God, as expressed in points #2 and #6 above. We can now understand why Lewis changed the original story (by Apuleius): “The central alteration  in my own version consists in making Psyche’s palace invisible to normal, mortal eyes – if ‘making’ is not the wrong word for something which forced itself upon me, almost at my first reading of the story, as the way the things must have been.” (Note, hardback edition, Harcourt, Brace & Company, New York, 1956.)

Related to the idea that Orual is not ready, psychologically, emotionally, spiritually, to see the god’s palace, is the idea of face. Orual is so ugly that she wears a veil over her face most of the time. When she meets Psyche in the secret valley the second time, she describes her as “so young, so brightface.”  “Brightface” is not a native English word. It is a made-up word, probably a literal translation of a Greek word or phrase. Much later in the story, Orual understands how she, and humans generally, use words believing that they are getting closer to the truth, but in fact they are often only building a wall, or repeating the same nonsensical things over and over. Orual herself kept in her heart for years her hatred, her complaint, her bitterness, and finally expressed it to the gods. However, her complaint had no end: if the gods had not told her shut up, she would have continued forever. Perhaps she felt that to express her complaint would bring her relief, but it did not, and never could. What she was looking for was relief, was true joy, but in order to experience that true relief and joy she would have to let go of her hurt, or her resentment, of her complaint, and also let go of her self and her self-centredness. When she meets Psyche again in the secret valley, she is more interested in whether Psyche still loves her than in finding out the source of Psyche’s happiness. In the second part of the book, she is forced to think about other people more than she has done before: about Bardia and Bardia’s wife; about her sister Redival; about her own father. She is accustomed to thinking of other people only in how they affect herself, but little by little she discovers how little she knew about those people. At one point, the Fox, her old tutor and advisor, tells her that the King is actually a little afraid of priests and women, and this astonishes Orual: she had never considered that possibility; in fact, she had never really considered the King, her father’s, real needs or feelings at all; she was only concerned with protecting herself against him. She is actually in his room where he lies dying, looking for a helmet to protect herself in her coming duel, when the King dies!

Lewis felt that myth was a vehicle for truth, a way to tell the truth in a way that people could understand more easily, more directly perhaps, than by simple straightforward exposition or explanation.