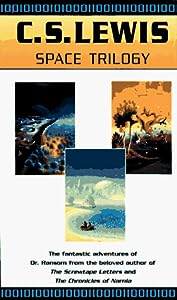 In this session we will start to read the first book of C.S. Lewis‘ science fiction trilogy, Out of the Silent Planet. I shall bring photocopies of the first chapter, just in case. The Japanese translation is titled   沈黙の惑星を離れて―マラカンドラ 火星編 (別世界物語.

I am now reading a biography of C.S. Lewis. Lewis was an Oxford professor, later also a professor at Cambridge. He was not known outside of university until he wrote a book called The Allegory of Love: A Study in Medieval Tradition (translated into Japanese as 愛とアレゴリー―ヨーロッパ中世文学の伝統 (1972年) (筑摩叢書)

.  (There are two copies in the Tezukayama University library: one in Higashi Ikoma, the other in the Gakuenmae campus library.) This book had a big influence on C.S. Lewis’ science fiction story. How odd! What on earth can be the connection between science fiction and medieval literature? Perhaps we can explore this a little after reading the story.

Meanwhile, here are a few sentences from the autobiography:

When Lewis began to write fiction, much of the inspiration was set moving by the academic studies on which he was engaged or which were still fresh in his mind. Perelandra [(#2 in the Space Trilogy, in Japanese 沈黙の惑星を離れて―マラカンドラ 火星編 (別世界物語)

] on its course… we know to have been due in part to the ‘joint project’ conceived with J.R.R. Tolkien… But another clue is to be found in The Allegory of Love, published in 1936 and followed by a second edition ‘with corrections’ in 1938, the year in which “Out of the Silent Planet” was published.

Tezukayama University library has several books by C.S. Lewis in English and in Japanese. Check it out here (just type “C.S. Lewis” into the search box).